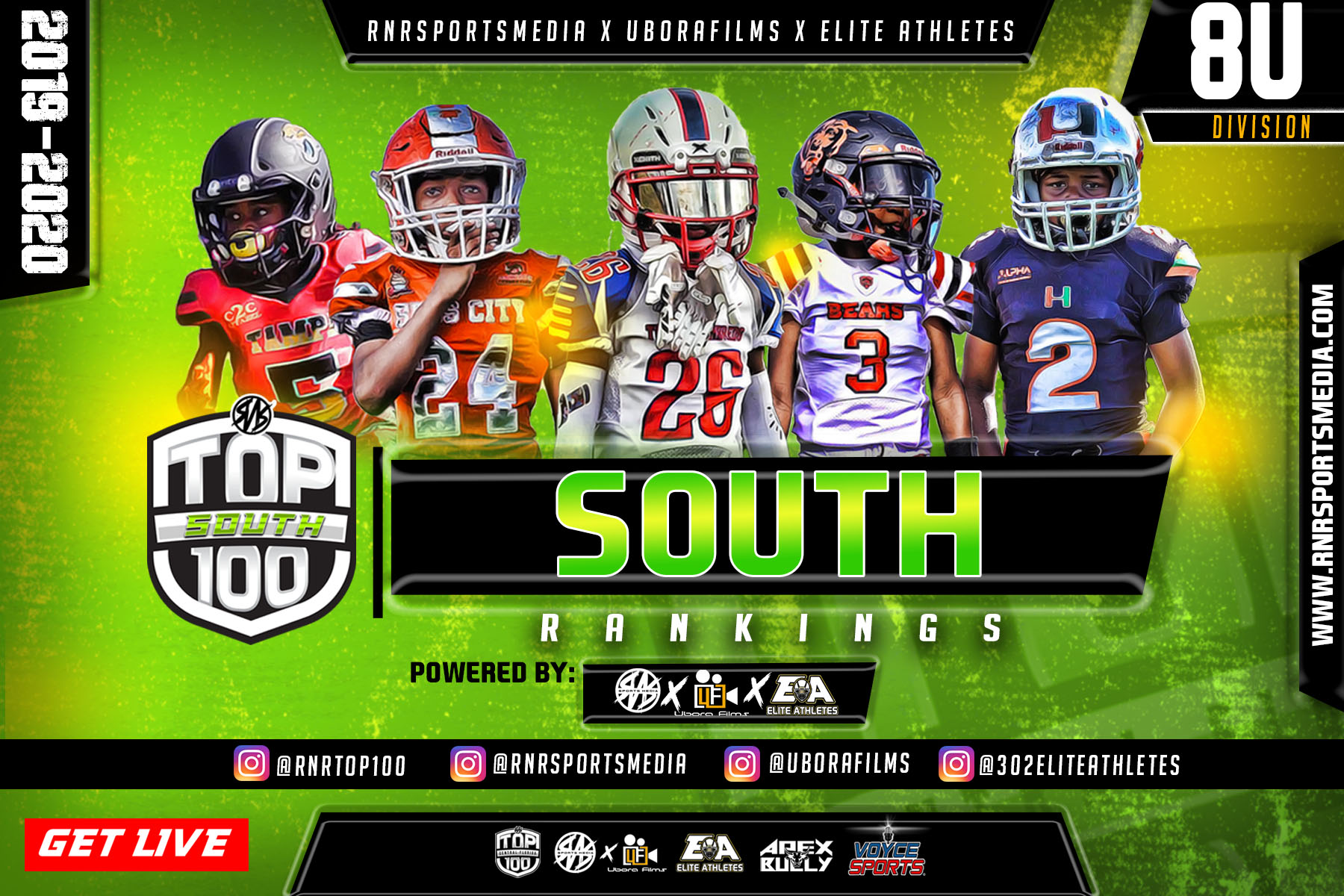 RNR Sports Media, Ubora Films, and 302 Elite Athletes would like to present the 2019-2020 RNRTOP100 RANKINGS| SOUTH | 8U. These young men have been seen either on the field, Film, RNR Combine, or recommended by our #CERTIFIED RNRTOP100 SCOUTS.

VOTE TODAY to help Determine the TOP10 8U IN THE NATION and TOP5 in the SOUTH!

Rudolph “Blaze” Ingram | RB | Tampa Jags | Blaze Blaze Blaze!!!! This young man is one of the premier players in the nation at the 7U division! From flag to pads the dominance, translated! Equipped with vision, balance, and Speed makes him an extremely elusive athlete that frustrate defensive coordinators weekly. He’s known for his offensive production but makes a huge impact on defense as well! In my opinion, his best attribute is not his skills but his mindset “The Way He Takes Over In Big Games He Has the mamba mentality for sure” says Rudolph “Coach Kool” Ingram. For instance, Fort Lauderdale canes, last play down by 7 he scored to tie it up, then score in ot. Not to mention vs the best talent around at the Elite Talent All American game, he was the only player to score on his team… 3TDs! VOTE BLAZE TODAY!

Daylen Brown | RB | Ft. Lauderdale Hurricanes | Brown is a classic down-hill back with explosiveness to elude open-field tacklers. He’s a big play talent with a chance to thrive at a high level as he continues to progress and mature as a running back. His size and speed combination makes him very hard to stop in between the tackles. Brown scored the game winning TD in the YNC Battle Championship crowning the Fort Lauderdale Hurricanes #1 in 8U for the 2019 season. He has been one of many reasons why the canes are the best team in the country. Vote for Daylen Brown as the Best RNR Top 100 8u player. VOTE BLOCKHEAD TODAY

Elijah “Beastmode” Giles | RB | Bessemer Tigers | BEASTMODE! is an every-down running back with the ability to alter the course of any game. Known for his rubber ankles, Giles has the rare ability to create additional yardage through elusiveness, speed, vision and feel for space in the open field. As one of the top athletes for #2 Ranked 8U Bessemer Tigers, he has made his presence felt around the south. On defense, he is a ball hawk. His ability to get to the football is one of the reasons why teams run away from him. However it doesn’t matter what teams try to do, he earned the nickname “Beastmode” for a reason. Vote Elijah Giles!

Noah Gigger | QB | Brandon Bears | Two Words…Game Changer!!!! This young man lead one of the most lethal passing attacks that this country has ever seen at the 7U division. He is a player that can literally take over a game and put his team on his back. This season, there was simply no answer to stopping this young man. His combination of size, speed, agility and football IQ was head and shoulders above all of the rest. Noah Gigger just has “IT.” He lead his team to win the TBYFL super bowl and also the Battle YNC Pre-season tournament. In the post season he continued his dominance in the Elite Talent All American game and showed why he is one of the best in his age division. Noah Gigger is a name we will be hearing for a long time! VOTE Noah Gigger TODAY!

Deshaun Morris II | RB | Georgia Thoroughbreds | They call him Flash!!! This young man needs no introduction as he has been seen all over the internet and TV screen. A very humble, cerebral, athlete that is well ahead of his time. Following the tutelage of his father, this young man has picked up the work ethic that is like no other. From the meal prep, to the weight lifting, Flash is setting the bar high for youth athletes. This season he led the state in TDs with 34 and managed to rack up 2000+ all purpose yards. On defense he averaged 5 tackles a game with 3 interceptions. Last year he was the Born 2 Compete 7U player of the year and has been nominated for 8U player of the year this season. As one of his team leaders for the GA Thoroughbreds, he helped his team win the B2C Georgia State Championship. Flash is quick and agile. He does not waste time getting in and out of breaks. As a fluid runner, he doesn’t need to slow down to make cuts. This is what makes him so lethal. As he is seen on social media training, it is obvious that it all translates over to the football field. VOTE “Flash” TODAY!