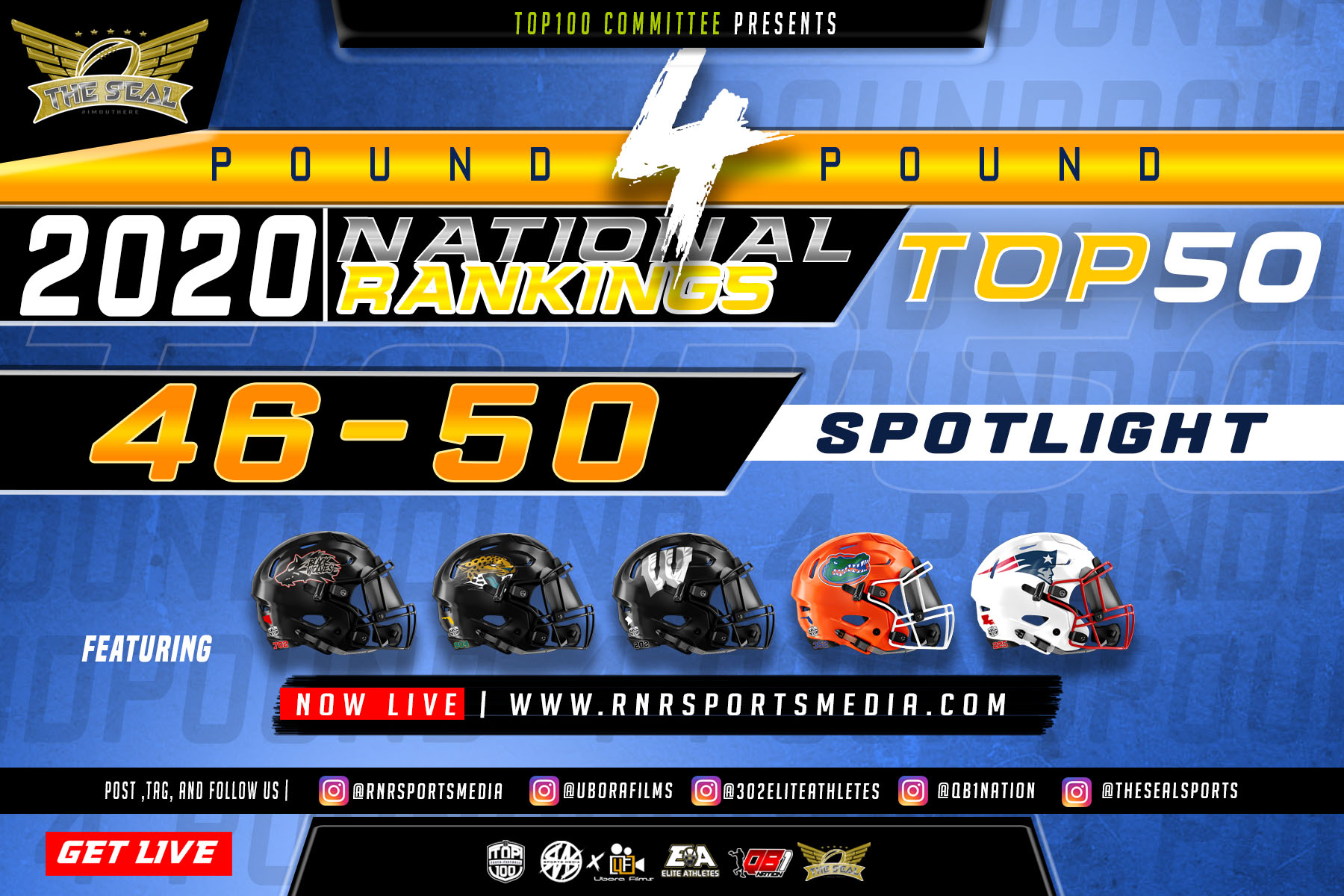 Rounding out the Pound 4 Pound Top 50 National rankings is thee Bayou state representers New Orleans Patriots lead by two-way star Jahkeem Stewart. The Patriots took on the challenge of playing anyone in their region considered a contender, entering the Seals National Rankings and sticking around for much of the season despite two loses to two Texas top ranked 13u teams. But it is never about how you start but more about how you finish and when it was all said and done the Patriots finished 3rd @ YNC. In there way to claim that 3rd place finish was the Top 10 ranked Bay Area Packers out of the Tampa, Florida Area. Locked in a dog fight the Patriots would edge out the Packers notching their biggest victory on the year taking home the YNC 3rd place Hardware. The state of Louisiana isn’t known for 13u & 14u teams but the New Orleans Patriots 13u changed that 2020.

2020 was a difficult year for the country due to the pandemic, especially Youth Football teams trying to bring some normalcy to their players lives. Which meant not a lot of time to gel with your team, that issue alone slowed the Gainesville Gators out the gate. Never the organization to run from the smoke the Gators would benefit from early loses to two top 5 ranked 6u’s. One thing about playing the best early is it pays off late if you learn from the loses. And that the Gainesville Gators did entering AYF National as underdogs then leaving as National Champs. With a resilient bunch of 6-year old’s two big plays versus the West Coast Power the Yellow Tape Boys (CA), would be the difference making the Gators THE 2020 AYF 6u National Champions.

White Oak Warriors have long been a National Power being the organization that has the most National Championships in Pop Warner history. In steps Youth Football Pop Warner Coaching Legend Cody Williams. Coach Cody resume alone makes any team he coaches a contender 2020 was no different. Eager to show the country White Oak is still a force to be wrecking with, The Warriors would take on two top 5 13u teams (757 Bucs (VA)& Maryland Seahawks) on the East Coast going 1-1. Armed with a brutal power running game and a clean crisp playaction passing attack plus the nation’s top 13u lineman Bryce Jenkins, the Warriors imposed their will on opponents. That recipe for success did not stop entering AYF Nationals where the Warriors would steamroll Top 10 teams the likes of the OG Ducks & 757 Bucs on its way to play for the 13u AYF National Championship. Now here is why the Warriors finished lower and not higher, the Warriors would go on to suffer their most lopsided defeat in the National Championship game versus the Miami Garden Ravens. Even with that lose the White Oak Warriors would still finish the season ranked number #5 in the country, with victories over 5 ranked teams 2020. While many would be happy with that, the White Oak Warriors goal is always Championship or bust.

When it comes to strength of schedule there was not anyone who came close to the Duval Jags, who would play anybody to gain their national respect. The Duval Jags took on the Challenge of playing in two major National Championship events (YNC& Uyfl). In that quest they did something no one else did which was match up with defending 7u YNC Champs CDJ (GA) for the 3rd time on the year. While coming up short the Jags most definitely proved the gap had closed in giving the Jags all they could handle in defeat. With their mission to obtain two Natty’s in their rearview, the Jags turned their attention to UYFL. Motivated to finish the drill the Jags would play their best ball knocking off the Las Vegas Tritons 14-0 to bring its 2-year-old organization its 1st major National Title (UYFL 8u). The Jags defense only surrendered 7 points on their UYFL run going 4-0 outscoring their opponents 80-7 dominating its competition. B.O.L.O for the Duval Jags 9u 2021 this group of kids went toe to toe with 3 of the top 5 teams 2020, expect this fast-rising program to build off that.

Nationals Finish : AYF 7u Winner Up

When it comes to comeback stories the Las Vegas Blackwolves earned that title. 2019 the Blackwolves were 6u when they tested those YNC waters. The outcome served as a rude awakening for the Vegas power. Rather than hold their head down the Blackwolves went back to the drawing board and devised a plan to raise their teams’ level of play. One of those plans was head South Preseason 2020 to adapt to the speed of the game and be prepared what they were hit with as a 6u. When all was said and done the Wolves came away successful winning a 7u Preseason tourney in the south. The Blackwolves stop down south proved to be rewarding because I felt the Blackwolves really proved 2020 they were National contenders when all was said and done. Especially when the Blackwolves knocked off couple contenders @ AYF Nationals. If that was not enough the Blackwolves gave the eventually AYF National Champs all they can handle falling short 6-19. Without a doubt 2021 the Blackwolves come into the season with National Championship aspersions. But 2020 was definitely a coming out party for the Blackwolves who won games Nationally in Idaho to South Carolina to Nationals in Florida. With a spread offense and huge trenches these youngsters look to take the next step in earning the respect of every team in their age group Nationally.