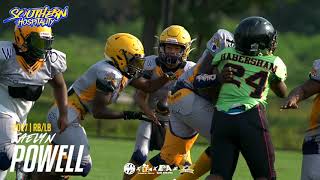 Jaelyn Powell 2027 | RB | of the West Orlando Jags is a Horse! Most defender’s won’t get in front of this Hellcat and those who do, get punished! At southern Hospitality showed defenders why they call him “THANOS”! On one play in particular he truck sticks a linebacker in the hole and is surrounded baby defenders. You would have thought he went down in the pile but he bounces outside, gives a defender the stiffy, and out runs the rest of the defense for 6! He’s had a very interesting journey but has now found his home on the West side of Orlando. With a healthy Jaylen in the Jags backfield and equipped with an impressive passing attack, the jags will be a tough team to beat. But mr. Powell is an early candidate for this years Florida Elite Heisman. He’s the motor to the high powered West Orlando Offense and is primed to do damage on the 12u division this season. But needless to say! #WELCOMETOTHEWATCHLIST