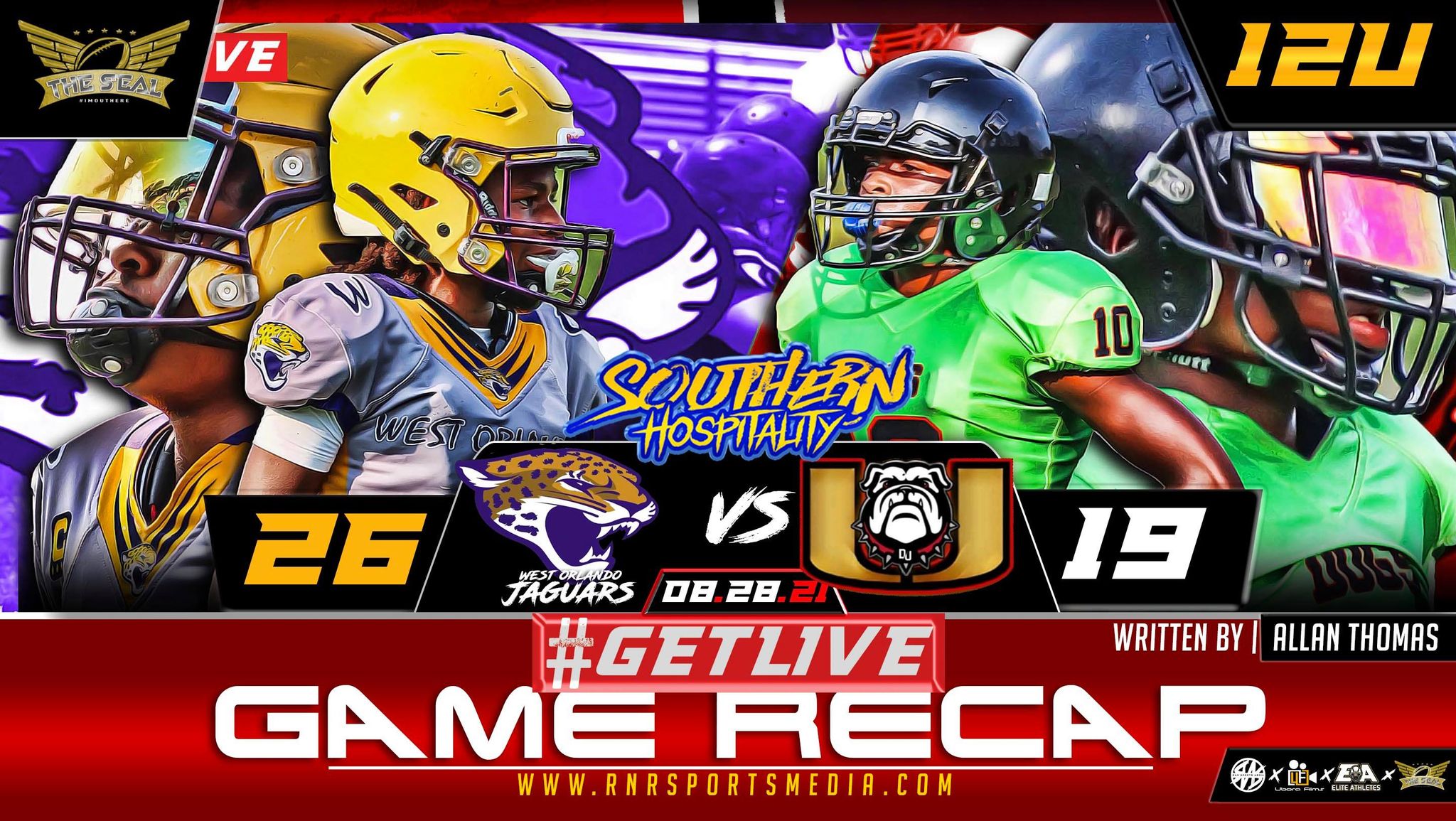 West Orlando Jags vs Dogs United 12U Southern Hospitality featured national contenders teams from all over. Some came with fame, some came to make a name but all came for smoke! West Orlando and Dogs United are two teams stepping onto the National scene primed to make much noise in the year to come. West Orlando would receive the ball first but the Dogs United defense would stand tall and force a 3 and out. The dogs would fumble the snap on the next play and turn it over to the West Orlando Jags. Jags’ RB Jaylen Powell would make them pay for the mishap. He trucks a defender in the hole and when you think he’s caught in traffic, he bounces out , stiff arms a defender and out runs the pursuit for the first TD of the game. On the next possession the Dogs give the rock to their stud ATH Noah Merriweather on a jet sweep and he shows our scouts that he’s the fastest athlete on the field. He bends the corner, hits the jets up the seam, and it’s bye bye baby! 7-6

Next possession Powell has a marvelous run where her stiff arms two Dogs’ defenders but is called out on a tight rope walk up the sideline. He Would leave the game due to an injury several plays later. 2nd Quarter the Jag’s defense forces a 4th and 11 but gives up the first down on a fake punt by #21. Later in the 2nd, Jags’ QB AJ Chung throws an absolute dime to WR David Coleman for a Tony tag tap in the corner of the end zone to bring the contest to 13-6 On the next possession, Noah Merriweather would keep a drive alive on 4th and 12 on a jet sweep. He fronts his foot bin the ground and get up field. He made a man miss in the hole and bursted for extra yardage to gain 13 yards on the play. Dog First Down! On the next play, the dawgs cough it up on an inside run and it’s recovered by Jags Safety Que Lewis. Two plays later the Jags return the favor and fumble in the backfield recovered by #24 Hambersham, to give the dogs great field position. Noah would make them pay! He evades 2 shoe string tackles in the backfield, his the crease and it’s a track meet for 6! 13-13

After the half the dogs defensive front would cause pressure on several plays and force 3 sacks on the drive but West Orlando QB AJ Chung kept his composure and connected with Tony “Dook” Brown for several big catches to put them within striking distance. He would connect with Dook again on a corner route and Mr. Brown would hit the boosters on the jetpack for another Jags TD. 20-13 In the 4th, Jags 11U Stud Trentsean Cummings would take a dive to the house for a 52 yard run to add to the lead. 27-13 But the dogs would not go without a fight. QB #1 Wallace connects with the Big dog, Noah Merriweather for a circus catch. He climbed the ladder and caught it over a defender, landed on the defender, got up and out ran the safety for the final score of the game. 27-19. This was a hard fought game boy 2 teams on the rise and we can’t wait to see how the preseason tests will help them on their seasons championship runs. Watch out for both of these teams!