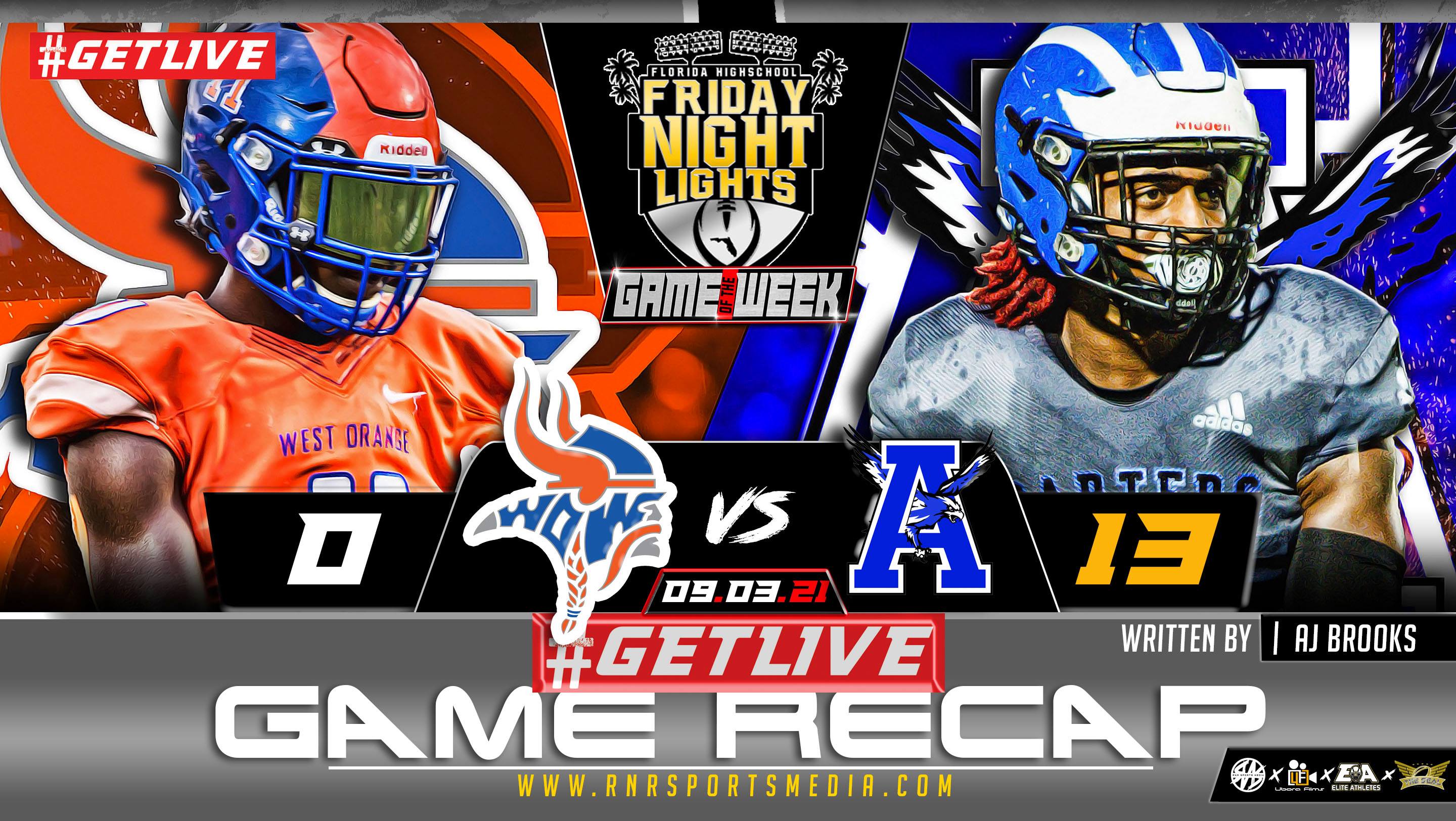 Week 2 West Orange vs Apopka Game of the Week

DEFENSE, DEFENSE and Special Teams was the name of the game. Apopka Blue Darters pulled out
the shutout victory 13-0 with great play by their defense and a couple key plays made by their special
teams unit. West Orange finished the game with less than 100 yards total offense and actually finished
with negative rushing yards (-4). After the two teams traded 3 and outs on their opening possesions the
Warriors seemed to be putting things together. Tyler Huff hit Jr WR Asaad Waseem for a 38 yard gain
on the Blue Darters sideline leaving the ball at the Apopka 10 yard line. The following play the Blue
Darters defense stepped up and came away with an interception by Sr DB Kavion Nichols. Both defenses
stood strong throughout the 1st half as the game went to halftime tied at zero.

For much of the night the Blue Darters tough yards were gained by Sr. Ath Quincy Fraizer and Sr QB
Andrew McClain. To begin the 2nd half Apopka picked up a couple 1st downs on their opening
possesion but was forced to punt. The punt flipped the field position and West Orange would take over
inside their 10 yard. After a quick 3 and out the Warriors were forced to punt from inside their endzone.
Apopka would get the ball inside the Warriors 20 yard line after a shanked punt and had a short field to
work with. After a few power runs from McClain the Warriors defense stood strong once again and
stopped McClain short on the 1st down mark on 4th down.
West Orange would take over the ball at their 9 yard line and the offense picked up one 1st down on the
drive but after 5 plays they were forced to punt the ball once again. Thats when Jr LB Rashad Watson
would changed the game with a blocked punt. The blocked punt was recovered by All State LB Travion
Barnes at the Warriors one yard line. A few plays Fraizer would cash in for the TD and after a successful
conversion the Blue Darters would take a 7-0 led.

Apopka would seem to take full control of the game after a 50 plus yard run from Jr RB Ke’Shawn Jones
and another short TD run from Fraizer giving him his 2nd TD of the game. Apopka would miss the extra
point conversion making the score 13-0 early in the 4th quarter. To start the 4th quarter hoping to spark
the offense West Orange would have a QB change bringing in So Trever Jackson. The rain would play a
factor for the remainder of the game as West offense just couldn’t find its rhythm.
With Sr CB Nikai Martinez not playing the Blue Darter pass defense was up for the challenge all night.
CB Kavion Nichols did a great job replacing him but the Blue Darters pressured the Warriors QBs
throughout the night. Sr DE Michael Spain finished the night with 3 sacks and a forced fumble to go
along with a few TFLs. The Sr DE also had a touchdown on a 32 yard punt return that was negated by a
penalty on the play. The 2-0 Blue Darters will play their next game on the road against Dr. Phillips, while
the 1-1 Warriors will also travel to face Wekiva.