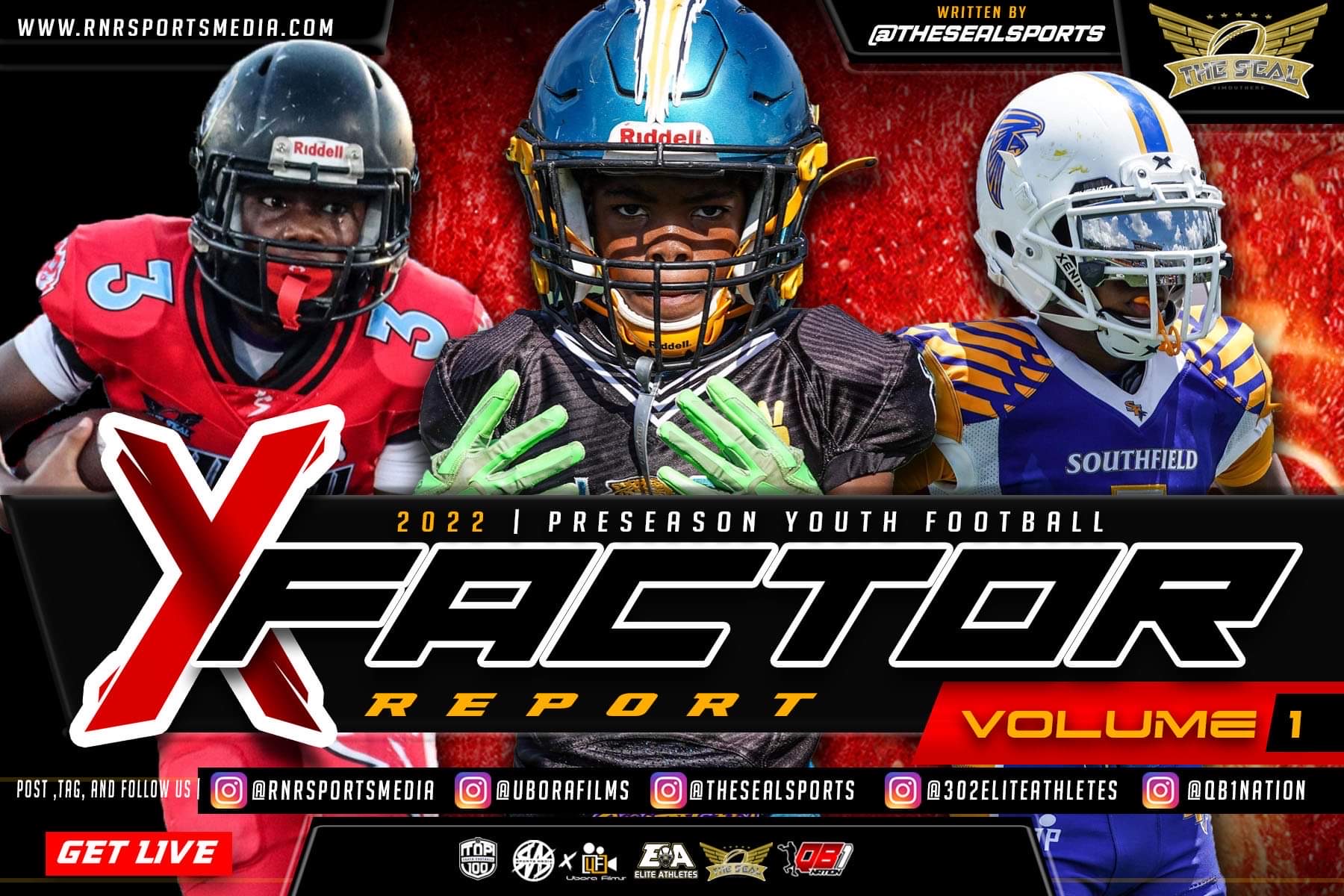 The Nation may not be aware the state of Florida has another dynamic running-back in the 9-year-old age group. Noah Roberts is the country’s best kept secret short & compact not to mention a stick of dynamite when he has the promise land in his sights. Speaking of the promise land Roberts visits that place at least twice a game, now run them numbers up and this X-factor averages 20 plus scores per season.

In one of the biggest preseason match ups at Southern Hospitality Roberts put his team on his back versus the #1 ranked Miami Garden Ravens. Roberts help extend offensive drives with a tremendous burst off short yardage runs and showed he was threat taking one to the house when the defensive lapsed. His vision and anticipation rank among the best of this running back class, and those traits help lead his team to an upset victory with his big plays. X-Factor is fitting for Noah Roberts as he gives his team a advantage being a National Championship front runner going into 2022.

Nicholas Sandoval hit my radar making clutch plays in the biggest of moments, now 3-years later nothing has changed. Blessed with the eye of the tiger not shying away from any challenge presented to him Sandoval is always on go-mode. 2022 Cali’s finest the IB Braves took on the #1 ranked defending YNC National Champion DEA Dragons 13u in Texas. Sandoval was tasked with covering fellow X-factor Ethan “Boobie” Feaster who holds at least 7 College offers. Only in X-factor fashion did Nicholas Sandoval stand tall in the battle, but he got the better of Feaster sitting on a route Sandoval jumped it in route to a pick 6. In a matchup between two National Champions Sandoval stole the show also coming up with two huge catches to lead his team to a huge victory & strangle hold on #1. Sandoval’s presence at corner in zone or man to man or deep downfield provides a compelling dynamic to any defensive strategy, while his offensive prowess out wide also warrants a long look what can we say but that’s what X-factors do. If were talking about starting the season with a bang Sandoval has set the tone already sending a message, he is defiantly bout that action.

Terryon Fonfield has plug-and-play potential in short-yardage rush defense situations as an 8u baby baller. Stout and explosive at the same time, he’s a natural run-stuffer who wraps up and finishes tackles through the whistle.

A powerful lower body generates surprising burst that throttles interior linemen into their own backfield, and he uses fine footwork to disengage and hunt down ball-carriers which is surprising for a 8 year old. As he develops into a more dominant physical specimen, Fonfield projects as a nightmare of a matchup for undersized centers and guards his age, not to mention Fonfield is a load coming downhill as a short yardage ball carrier for his team. The season is young just like Terryon who has made such a huge impact in preseason so far, no doubt he is a force to be wrecking with that has made a name for himself 2022.

Some players just can’t be denied simply because how they jump-off on film making plays. Titus Tauanuu has a non-stop motor you can find him wherever the ball is making plays.  Few linebackers appear package-ready for the physical rigors of travel ball like Tauanuu. Capable of manning multiple linebacker roles, this Cali standout flashes the strength to quickly shed lead blockers en route to the ball and finishes with violent collisions.

Agile enough to stick with running backs and tight ends in pass coverage, Tauanuu instincts help make him a nightmare for opposing offenses making plays in the backfield by the boat load preseason so far and held his own against a barrage of downfield targets. Blessed with the frame and a tremendous upside Tauanuu is on the right track to being a force on the next level.

Theirs players that come along every couple of years an unstoppable force that plays the game as if they were born into it. Roderick Lewis Jr. has led his Miami Gardens Ravens to back 2 back AYF National Championships. Lewis hasn’t yet to meet a defense that has held him out the endzone or even contained him. Arguably Youth Football’s human highlight reel this X-Factor has complied quite the collection of jaw dropping plays. Lewis is a decisive runner who doesn’t waste steps in the backfield. He plants his lead foot, cuts and bursts forward with exceptional speed. He’s the rare running back who combines breakaway quickness with between-the-tackles power and may pay immediate dividends in his team quest for a third consecutive AYF National Championship. If there were ever a player worth the price of admission cut it to see Big Game Rod Lewis.

When it comes to bringing the pain and playing the game like his hair is on fire, Eze Sua is who immediately comes to mind. The OG Ducks Eze Sua is his team’s enforcer he sets the tone, and the defense follows. Growing up in the heart of Pac-12 country, Sua spent his childhood watching standout linebackers emerge from talent-laden USC/UCLA. He is set to follow a similar path to stardom, regardless of where he ends up competing in High School. Sua is a prototypical strong-side linebacker who can take on tight ends and get after the quarterback. His lateral quickness helps him recover from mistakes, his strongest asset is pre-snap anticipation of where the football is headed, and that’s a dynamic that will only improve under the direction of a high school coaching staff. Preseason so far Sua has been all over the place making tackles & plays like only a X-Factor can.

2021 A’meir Parker made a huge impact as an RB/ATH for his Southfield Falcons he displayed his versatility. 2022 to my surprised A’meir has added WR to his resume with the running-back mentality after the catch making him the ultimate X-factor. A wide wingspan and elite leaping ability create an impression he’s playing where he will develop into blue chip prospect, augmenting a special blend of speed and agility.

Parker athleticism was on full display preseason in the Hospitality Series turning opponents’ secondaries into airports, and he’s worked to sharpen route-running technique while further expanding his physique. His skill set should equate to major gains after the catch, evidenced by couple of showstopping acrobatic catches and scores during the Hospitality Series where he was unstoppable. This phenom hasn’t scratched the surface on where his talent can take him with this being his 1st year playing the receiver position. If this is the just the beginning of Parkers rise to the top look out Youth Football world he just getting started.

Some of the most skilled and lethal recruits had no set position on the Youth level, but their experience playing multiple positions help make the High School transition smooth. Trevion Williams of the Duval Jags has a good problem on his hands and that’s being gifted at multiple positions. Williams is a prospect well-prepared for the speed and physicality of travel ball football on the youth level. He has stuck out like a man amongst boys in defensive coverage, effectively shutting down his half of the field. William’s speed is evident, but his hips and that fast twitch has me super high on him as a Defensive back. His abilities with the ball also make Williams a special-teams threat in the return game. Not to mention the variety of ways they get this speedster the ball is a telling sign of how gifted he can be. With all that was said about this X-factor it’s still just Preseason, but this kid served notice he has arrived roll out the red carpet.

When your nickname is Hercules you have to live up to the hype and 2022 Darius White has did just that with his outstanding play. Compact and agile, White is difficult to bring down in the open field, and gang-tackling is routinely required because he is such a punishing runner dishing out nasty stiff arms while steamrolling defenders. He isn’t a major burner but will beat down defensive efforts with a relentless attack-mode approach anchored by powerful legs.

White, who can also contribute with consistency as a receiver out of the backfield, breaks tackles in bunches but does a great job avoiding contact altogether by relying on excellent vision. His ability to impact an offense as an all-purpose weapon should expedite the quest for high school reps. There is no time like the present to have his best season, which it looks like White is on track to have.

Jacob Smart has started the 2022 season on fire as a player on a mission leading his troops into battle. Smart owns multiple triple-digit tackle totals in his Youth career, and textbook fundamentals at the point of wrap-up make him especially effective against rushing efforts. He’s instinctive and savvy enough to persistently sniff out plays, putting pressure on opposing offensive coordinators to mix things up at a pace that makes their personnel uncomfortable.

I’ve grown so accustomed to Smart showing up big in the primetime matchups it’s easy to take his success for granted or assume he’s peaked as a player. That isn’t the case, as a blend of elite athleticism and unique football IQ set the stage for further advancement toward continued stardom. Jacob Smart is on his way to 2022 1st team  RNR All-American honors with the pace he is playing at.