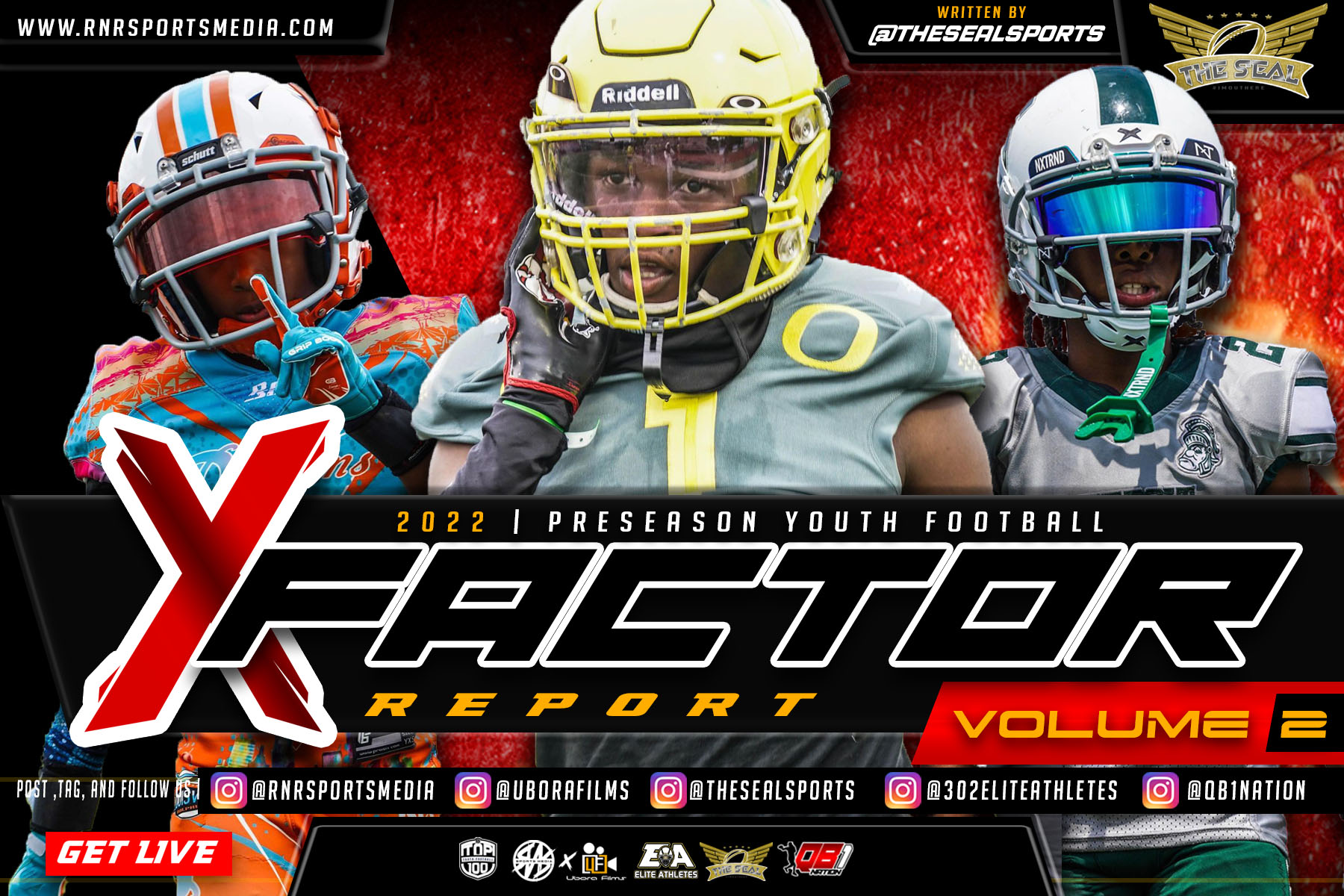 Dontavius Davis Jr. Has proved to be the #1 ranked interior lineman in the country off of Preseason efforts alone. Davis has a tenacious mindset off the snap, which will make him a threat to his future targets. He’s a motor that doesn’t stop running until the whistle is blown. Davis also is comfortable playing defensive end as well.

The Georgia eagles boosts one of the toughest schedules so far, so that should show you how dominating this X-factor is that he showed it versus the likes of Twin City Outlaws & Miami Garden Ravens. Davis isn’t a player just taking up space on the field to block; he scouts out his opponent as well and exploits their weaknesses. Versus two National Champions Davis showed he was arguably the most valuable as well as best player on the field. This talented beast embodies what a X-Factor is.

Sometimes you have to listen to these prospects when they talk. Ranked Strickland last year and he felt disrespected and voiced his frustrations and vowed to show us how much we slept on him. Well, 2022 so far, he has proved without a shadow of doubt he is one of the most dynamic playmakers in the country.

Strickland has a leaping slide cut that allows him to break diving arm tackles in the open field, turning medium-length gains into monster plays. He also has nice lateral movement that allows him to quickly bounce runs outside the tackles, where he seems the most comfortable. Finally, a jump cut gives him some elusiveness in the backfield and is impressive for his age. This X-Factor calling card is versatility because he is so special with the ball in his hands that’s on punt & kick returns as well as bubble screens and jet sweeps. This kid just makes things happen in a big way which is only fitting when you’re donning the X-Factor label.

Louisville Kentucky Youth athletes have been proving they’re amongst the best in the country and the play ball in the bluegrass state. Northern Hospitality Speedster Justin Green took on the challenge of being the most exciting athlete at the event leaving spectators in aww with a couple of breathe taking touchdown runs.

Green is a player you can line up at a number of different positions on offense, defense or special teams. But wherever he is on the field, he’s a threat to make a game-changing play.

His vision and instincts make him a dynamic return man, and his hands are good enough for him to be a slot receiver at the next level. He’s a special talent with the ball in his hands.

There’re the guys that look the part but can’t play it and then their guys who look the part and is every bit of what you think he is. Meet Elim Toudle who made a name for himself Southern Hospitality up top chicken boxing his opponents. A couple of things immediately stand out when examining Toudle. The first are his hands, which envelop the ball and don’t allow much room for defenders to swipe away possession. The second is a natural feel for the game, as he seems savvy enough to understand how to attack a myriad of defensive looks.

His off-ball acceleration is impressive for an athlete of his stature, and that burst becomes even more dangerous when he snags a throw in stride. This Philadelphia native is only going to get better like only X-factors do.

If Johnny on the spot was a person that would be A’mari Dorsey but that’s just a testament to his high football IQ. Dorsey instincts sets him apart from the competition. He’s dangerous when given space to accelerate, and his ability to read the game and react on a dime enables him to be in the right place at the right time. Dorsey is a quick player with fast feet and spot-on instincts, critical attributes of an effective cornerback.

With his athleticism and lightning-fast reactions, Dorsey possesses all the qualities needed to excel as an elite cornerback. He utilizes his speed and vision to accurately predict the opposing quarterback’s next move and apply coverage to receivers. All the attributes mentioned help Dorsey account for two interceptions and one being a pick six, not to mention his td reception because this kid is also making noise on the offensive side of the ball. With so much Football left Dorsey is well on his way to possibly becoming the next big name out of Detroit.

There’s something to be said about an 8th grader anchoring the left side of the offensive line for his varsity squad. Jayden Dean with his size and wingspan as a 8th grader he is most likely going to grow into what colleges look for in an offensive tackle. He is both strong and athletic, with the power to hold his own against the bull rush and the agility to handle speedy pass-rushers. Plays well in space while pass-protecting and has shown good balance and the ability to slide along the outside of the pocket as the play develops. He has displayed really impressive footwork for an 8th grader playing varsity high school ball, especially considering his large frame. Very consistent downhill blocker on running plays that finds and maintains good leverage on the opposing defender. He will sometimes simply take his man out of the play with his quality block-holding skills. Talking about upside this X-factor has a chance to dominate High school for 4-years if he continues to develop at the rate he is going.

Marcus Boler sets himself apart from most defensive tackles in that he has displayed the ability to rush the passer with consistent and intimidating success. He is talented at shedding blocks and forcing the pocket to collapse in on the quarterback. When unable to reach the passer, he has shown great awareness in getting his hands up to deflect passes thrown in his general direction. Has an impressive quick burst off the line of scrimmage and is fast enough to chase down ball-carriers in the backfield and stop them for negative yardage. He is endowed with enough size to halt the pile on runs between the tackles. Has more than enough upper body strength to hold his own against most offensive guards and tackles, with a high motor that he uses to drive blockers backwards or simply out-maneuver them again and again. So far this season Boler has made his presence felt camping out in his opponent’s backfield which earned him X-factor status .

Quinterrius “Moonie” Gipson is a multipurpose threat who can hurt defenses as a receiver or runner. He possesses great vision and the speed to break long runs any time he touches the ball.

What makes him special is the burst he displays when he finds a crease in the defense. Moonie is a menace when he is locked in with bruiser mindset if you get in his path when he picks up a head of steam. Blessed with blistering speed this X-Factor shows great patience in setting up his blocks and then sticking his foot in the ground and getting upfield in a hurry. He runs with great balance, and he always seems to break free from first contact. Moonie is in the running for #1 Running-back in the class of 2027 he is that special.

Skinny :
Xavier Reed has been putting on a show thus far this season, I mean he had to be to make the X-Factor Report. Xavier Reed one of the smoothest young route-runners we’ve scouted in this cycle and caps off those downfield attacks with a strong showing of body control as he brings down the ball.

Reed is a fearless competitor who can be counted on to secure several acrobatic receptions during the course of a season. He attacks the football with ferocity and puts himself in prime position downfield with excellent acceleration at the top of routes.

His ability to make midair adjustments allows a quarterback to feel more confident about being able to the put the ball in his vicinity rather than precisely on the money. If you want to be entertained checkout a couple of this X-Factor touchdown catches and see why he is highly regarded.

When you been the man since 8u then there is no surprise when you’re mention as top of the class. Demetrius “Meaty” Carter is the type of player that can make or break your defensive front. He has every physical tool he’ll need to succeed at the next level. He doesn’t have the ideal size yet for a pass-rushing interior lineman. But his quickness off the snap and ability to blow up plays have made him a prime target for several top-defensive accolades nationally. He is strong as an ox with an explosive first step that allows him to become a nightmare for opposing offenses, and he has exhibited a high motor that allows him to continually pressure opponents through all four quarters of the game. Carter is also a punishing tackler that plays the run effectively, and one that can diagnose running lanes fairly well. Though not an utterly massive lineman, his frame has the room to add weight. Still holding the crown as that dude Meaty has paid the cost to be the boss

When you take the nick name Honeybadger you’re fearless, competitive & relentless. Those are just some of the attributes Dashaun Morris II possesses that separates him from his peers. When Morris burst on the scene 8u for the Thoroughbreds, he was considered one of the top RBs in the country with his elite track speed. But, to everyone’s surprise this kid who is blessed with those X-Factor genes made an early transition to defensive back on the 9u level. Already a workout machine & Track star this phenom also boosts a next level mental make-up passed down from his father. I could go on all day on how mentally advanced & focus this kid is, because that’s a trait that only top tier athletes possess that should tell you what you need to know about his upside as a two-sport athlete.

An absolute Youth Football game-changer in the secondary, Honeybadger is an athlete who enjoys taking on the challenge of covering bigger receivers. He has a competitive nature that makes him attractive to a scout’s eye, and his versatility on the field makes him a lethal threat in all three phases of the game.

Morris plays the game with a physical nature, particularly in short and intermediate passing situations. He has top end speed and explosiveness off the snap. He uses his athleticism to outmuscle receivers at the line. Morris is the Certified Dawg of all dawgs because it isn’t a match up or player, he has bucked wreck on. This confident talented X-factor welcomes all the smoke stamp this beast because he is really like that.