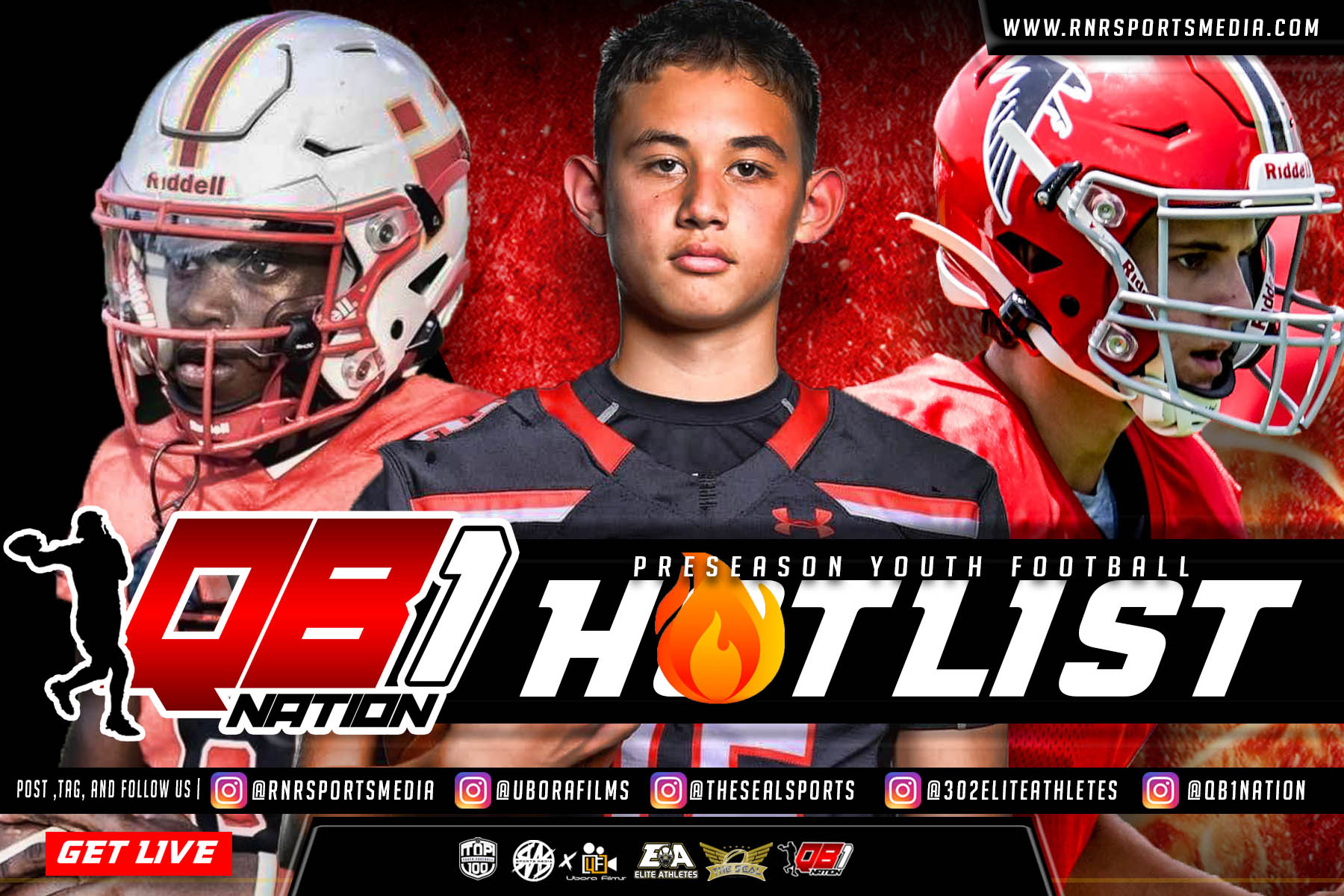 I’m willing to bet it hasn’t been a 8th grader ever that has played significant time in a top 10 National High school match up. That’s until Trent Seaborn folks who happened to be baptized under fire versus Georgia Power Buford Wolves. This Young Gunslinger never flinched under pressure while he wasn’t perfect, the mere fact he finished the game 7/12 with 77 yards passing, tossing 1 td pass adding 1 interception to his stat line tells you about his upside.

Seaborn has already showed glimpses of being a potential program-changer behind center, commanding respect as an elite passer and leader. He threw for 271 yards and 2 td passes & 1 rushing td  while going 18-18 with a perfect passer rating as underclassmen on JV, showing off the best accuracy of anyone in his class.

Seaborn’s impeccable footwork also stands out, resulting in the lone grade for pocket presence among his class.

His ability to handle pressure and step up in the pocket provides glimpses of potential high school stardom. Seaborn convinced me he’s the real deal during 7 on 7 on a college tour with the varsity showing how quickly he went thru his progressions getting the ball out his hands before the 4 second play clock expires which showed how high his football IQ is and his ability to read defenses.  In 11 on 11 JV action Seaborn showcased how he handled conflict in the pocket as he smoothly maneuvered away from oncoming pressure before reestablishing his platform and finding a downfield target. Many have the physical tools to play the Quarterback position which Trent has, but what separates him from his peers is his work ethic and most importantly what’s between the ears. In closing this phenom has all the makings of what it takes to be a 5-star Quarterback don’t believe me just watch.

The 2021 version of Reagan Toki was good enough to yield him his 1st College offer from USC. Now this 2022 version of Reagan Toki has the looks of the number #1 overall Quarterback in his class. While it was just a scrimmage Toki was out there grooving & dealing versus the OG Ducks reminiscing of fellow Poly QB Micah Alejado (Bishop Gorman) Former Vegas Strong (NV) 14u QB.

Toki is extremely efficient inside the pocket, standing tall with a sturdy frame and finding his targets in a hurry, though he isn’t too limited as a runner either. He uses excellent lower-body fundamentals to fire footballs with precision and shows plenty of zip when he needs to.

The accuracy stands out utmost on film, as Toki has the range to spray strikes across the field and does a great job dropping well-timed deep balls just ahead of ahead of sprinting wide receivers. Listen Toki is one of those Gamers who can carry his team once he gets in rhythm defenses are pretty much at his mercy. Not many outside of California knows about this Field general so look for 2022 to be his coming out party.

In a lot of situations involving prospects on the rise prospects fathers are always leading the charge believing in their child’s ability. Vincent Sr. always believed in Junior despite being in a run base offense on the 9u level. Now two years later and a different offensive scheme Seniors beliefs have become a reality. As V.J has come into his own and developed into one of the top Quarterbacks in the country for the class of 2028.

V.J has made the most of his 2 full season in a wide-open spread offense tallying up some pretty impressive numbers while spreading the wealth when it comes to touchdown passes. He isn’t a burner in the rushing attack, but he manages to do damage as a downhill runner who is tough to take down.

His comfort level in the pocket is that of a seasoned vet at times far from a finished product but you can see his upside at the position. Few 2029 passers can put more power on throws than Mosely, who balances his aerial attack with good rushing ability. Mosely’s accuracy ultimately sets him apart from this pack when he’s given time to operate in the pocket. In full command of the offense Mosely has displayed the mental toughness to block out the noise. When his team is down or in need of a spark this Field general is at his best, leading his team to comeback wins or making sure his team goes out with a fight.  Some qualities you just can’t coach and that’s heart and this phenom has a lot of it.

When it comes to Tristian Sabb if we keep with his last 3-year trajectory then were looking at one of the Top QB’s in his class. I’ve had the pleasure of watching this young man develop thru sheer hard work. He has gone from an average prospect to elite and 2022 Sabb is dialed in looking like he is in super siyan level 5 mode. Sabb is Mr. Consistency on the East Coast .

His pocket mechanics are among the best in his class, and he brings a large dose of quiet confidence that seems infectious to those around him.

He has leadership attributes, proving that as a peer he can raise his teammates level of play. Sharp footwork, persistent focus on downfield progressions and a smooth release result in elite-level accuracy. Sabb regularly does an excellent job of placing passes where only his desired target can come down with the football. This touch and intelligence are evident in his highly efficient stat line so far this year. 2027 race for #1 QB in their class is going to be interesting but rest assure Tristian Sabb is definitely making a strong case.

This time last year I had prospect Derrick Baker pegged as a runner more than a passer when it came to him playing the Quarterback Position. But 2022 he joins a new team and of course a new scheme that brought this Field Generals physical attributes full circle. Baker matched improved pocket mechanics with excellent athleticism to become a dominant force so far in 2022.

He may throw the best deep ball in this class and can deliver tight spirals while moving laterally to avoid defensive pressure. As a ball-carrier, he can deliver blows with his big frame and powerful rushing style.

Baker has played some of his finest football in pressure-filled circumstances with the Golden Army in games versus Lambo & IB Braves. That’s an attribute a high School Coach is sure to appreciate.

You can have all the talent in the world and it can just not be your time. After seeing Hayes McGinnis Preseason, I can say confidently it’s his time 2022 seems to be the year this Field General puts it all together. McGinnis is a savvy leader who possesses an accurate arm and overlooked mobility. His drop back is consistent and precise, leading him through the same motions on a repetitive basis.

Despite a lack of elite physical stature, McGinnis is able to get the ball downfield with velocity and touch. His development in a High School weight room should further enhance these traits and make him more battle-ready as he takes on blitzes.

He’s a quiet, natural leader who responded well to any challenge especially at Southern Hospitality action. His skill set and demeanor remind me of seasoned vet with a wealth of knowledge. 2022 Hayes Falcons United team is leading the country in scoring and margin of victory. This gunslinger is in the zone with the most dangerous receiving core in the country with the numbers to match. 2022 seems to be perfect timing for Hayes McGinnis to make a run for #1, I mean his play does speak for itself.

Bayou state has delivered me a hidden gem to my radar and I’m excited to share with you guys’ how special Field General Ja’Kai Noble is. Noble is the premier improvisational playmaker in this quarterback class. Tremendous football IQ, hustle and gamesmanship create an athlete who refuses to waste downs.

He can extend plays with excellent lateral mobility, evading defenders and displaying a unique sense of how things are unfolding for teammates downfield. Noble is precise as any other 2028 passer and can sling it deep with desirable touch. He proved his leadership qualities multiple times as a Tigers standout.

Noble has exploded on the scene this year but is no stranger to the National scene since he is a former Slidell Hurricane standout. Noble singlehandedly beat Heir Apex Predators making plays breaking down coverages as he escaped the pressure. I’m going to enjoy watching this phenoms development because he has tremendous upside.

When you’re considered RNR Top 100 top QB you need to have the talent, upside, film & numbers plus show it at a combine. The ever so polished Jack Heaslet owns that title along with all the things needed to hold the crown. Heaslet arguably put together the most complete performance from start to finish from the summer to now fall. He displays leadership while commanding a nice wide open offensive scheme, he delivers daring strikes without hesitation and rarely looks out of his element no matter the opponent.

Unlike several dual-threat prospects, Heaslet will predominately use his legs as a fallback option. He slings the ball downfield with smooth mechanics and delivers darts with touch, racking up huge numbers on land and threw the air in X-Factor fashion. Heaslet completes a very high percentage of his passes, consistently staying a step ahead of defensive efforts. His pocket presence and in-game demeanor make him a candidate to compete for early reps at the next level, where consistency in the passing game has proved big for prospects making the transition to the next level. California continues to be the home of Quarterbacks and nothing changes with talented players like Heaslet.

The hottest Quarterback in Youth Football is IB Braves Chase Watkins fresh off picking apart the defending AYF National Champion OG Ducks.  Watkins game film vs Ducks is among the finest you’ll find from any 12u quarterback 2022 so far. He uses an effortless throwing motion to launch the football far without sacrificing velocity. His accuracy remains steady even at an extended range, and Watkins isn’t afraid to challenge even the slightest seams in an opposing defense.. His ability to handle pressure in the pocket will be key in taking the next step in his development, Watkins presents enough maneuverability to buy time when necessary. Slept on by the rest of the country until this past weekend, Watkins is proving that his best work is yet to come he is just getting started keep your eyes peeled this phenom is trending up.

One of 2021’s most prolific passers as far as numbers go Austin Mitchell is off to another blazing start. Mitchell is the most decorated quarterback prospect from a statistical standpoint. His efforts were aided by desirable football intelligence (and impressive precision.

He is very efficient and doesn’t need to attempt 33 passes per contest, despite not attempting a ton of throws “ATM” limited his turnover total. Mitchell seems to grasp which chances are worth taking and which are ill-advised.

His physical attributes aren’t extraordinary, but he does possess the arm strength and for mobility to light defenses up. Still, his success rate and smarts seem to set the stage for a strong run for his team looking to compete for a National Championship. This Field General put up 57 TD Passes 2021 and is at 16 already with more weapons looks like “ATM” is on his way to cashing in big. Don’t believe me just watch.