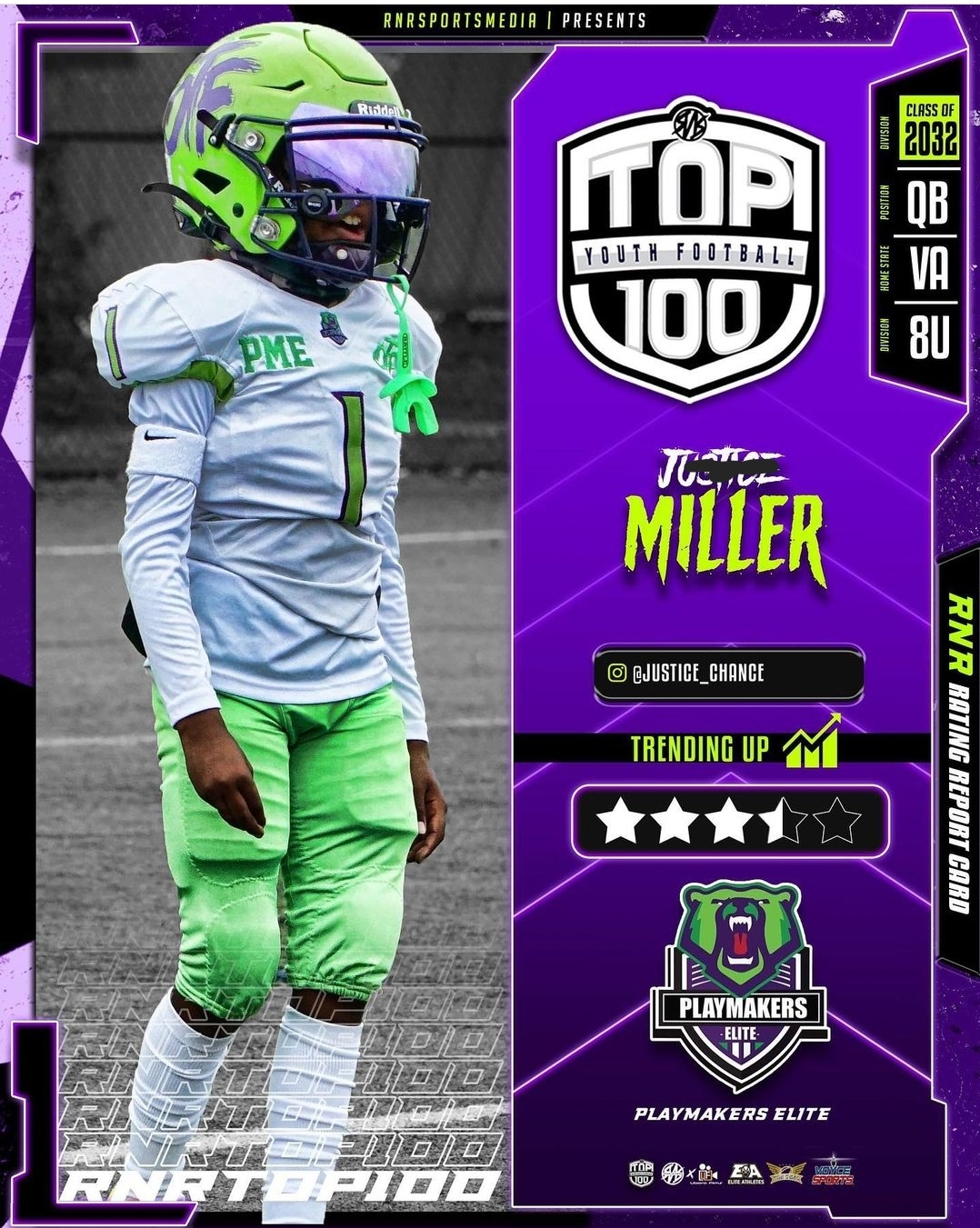 The best Qb’s are the ones who take the keys and go. At the 8u level, no team throws the ball it’s majority designed Qb runs, tosses, and power schemes. I introduce a Qb who needs no introduction because his play does the talking. This young general is exciting to watch, his Swag or drip as it’s said nowadays is impeccable. When you play a national schedule and dominate more times than none, word goes around about a new sheriff in town. The future is promising.

There’s a lot to be excited about when you watch this young man’s film. Justice is an explosive athlete who’s a nightmare for any defense that he faces. This season he’s amassed legendary numbers, 47 TD passes with 2,400 plus yards. That’s absolutely astonishing. Justice is a human joystick, his mobility seperates him from the rest of his class. I think of Kyler Murray when I see him scramble. Justice is smart, he doesn’t take unnecessary contact in the open field which is vital to his offense. His ability to stop on a dime is outstanding, as he operates out of the phone booth with the best of them. I’m very impressed with his pocket awareness, his third sense is critical and you can’t catch who you can’t see. The next thing that impressed me was his playaction fakes. Justice is excellent at creating an illusion. It’s like having a three headed monster in the backfield. If a defense makes the wrong choice, that’s six on the board. Justice is very accurate as well, the ability to place the ball for his recievers to have an easy day is very impressive. I’ve yet to see Justice put his recievers in harms way and my hope is that it stays this way his entire career. Justice surgical when he sets his feet, adding to an already explosive offense. Justice is special, once he maximizes his skillset then the game is his.

You want to know the scariest part about this all? Justice is just getting started. To be this talented and still have things to master is amazing in itself. These tweaks will elevate his game far beyond what Justice could ever imagine. The first thing Justice will benefit from is adjusting his ball load placement. He has a tendency to have the ball Just above his belly button creating a dip in his motion. This dip leads to delays that can be crucial in the clutch. Justice can correct this by loading the ball directly over his right chest area, this creates a smoother release and transition from chest to Apex. With this being said Justice has the tendency of having a closed Apex or tight elbow. This creates a strain in the elbow area which can be devastating in the long run. I’d like Justice to get to true 90 or his small l as he transitions from his chest directly to his throwing motion. Justice should also finish his hip rotation, he has power sitting on his back foot that must transfer forward. The next thing to correct is his posture. Justice should start tall and finish tall on every throw but has the tendency to lean too much on his back leg. This forces his shoulder to drop taking away all of his momentum when passing. Starting tall and finishing tall simply put is, having his feet shoulder width apart with the slightest bend at the back leg. Balance is everything for a Qb. The last thing I’d like Justice to implement is attacking the line of scrimmage. When he scrambles he has a tendency to stop and pop, as he gets older the game will call for Justice to be able to put the entire defense in a tough position. Force the defense to adjust to your game. Attacking the line of scrimmage while scrambling gives a Qb three options every time, find an open receiver, run to the green grass, or live to play another down. This is a game of choice, the power is in his hands.