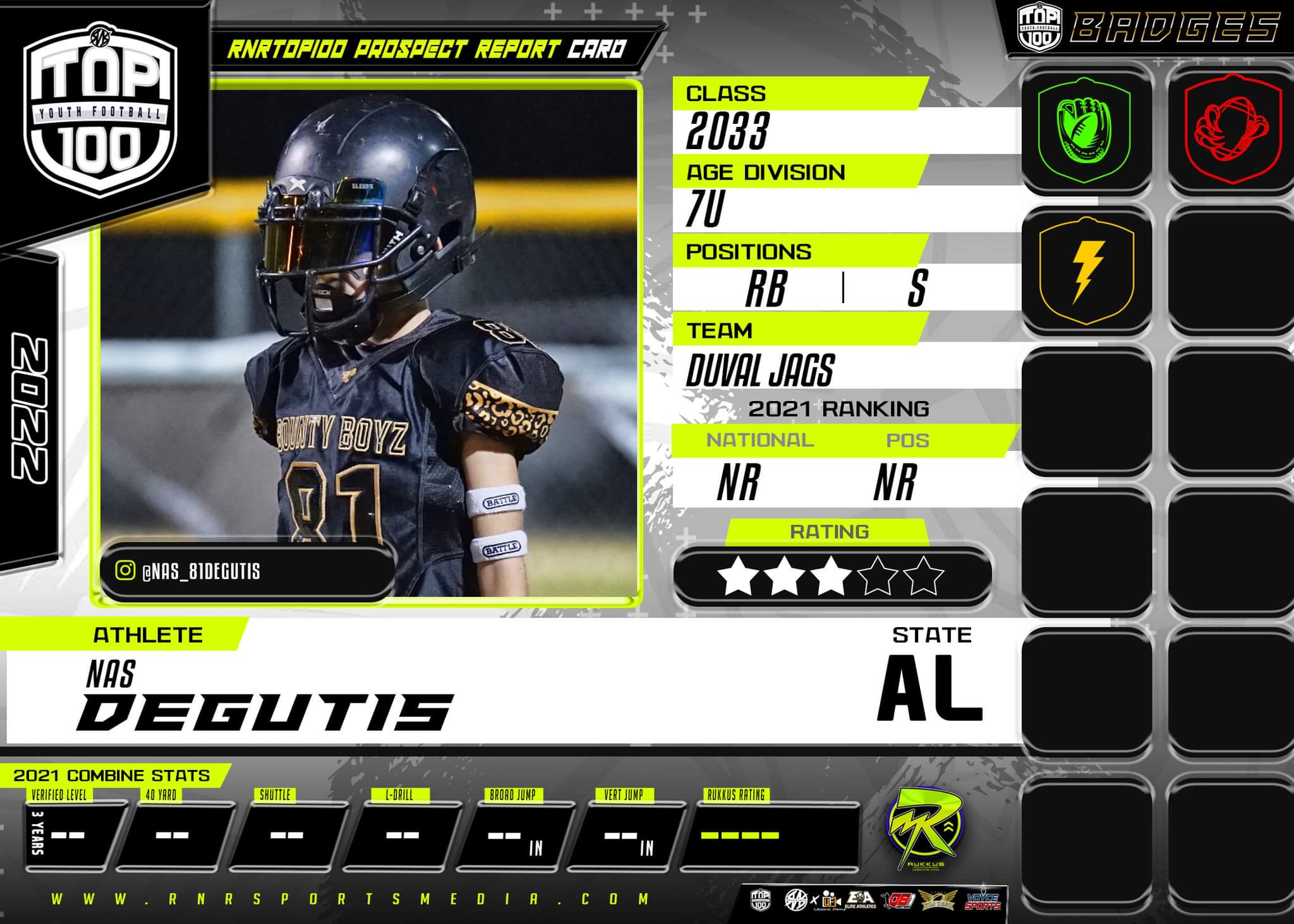 Nas is a prospect who has a lot of promise. I like his skillset and the way he plays the game, he has fun. Nas is also an athlete that can impact the game on a multitude of ways from offense, defense, and special teams.

I’ve seen some good things while watching his film, Nas is special. I like how Nas can change direction at the drop of a dime, his feet are agile and his movements are swift. Paired with his quick first step, this makes Nas a tough task for a defense to try to tackle. Catching at the 7u level is at a premium, Nas is scary weapon because he can play the backfield, the slot position, and the wide out position. This forces defensive coordinators to plan just to contain him. Nas adds value to any team that he plays for because he can catch out of the backfield, run the ball , and make an impact on defense. From his hybrid safety position Nas makes plays left and right and is good at playing sideline to sideline. Nas is a ball hawk, he doesn’t let many passes go over his head and he’s excellent at finding the ball in the air. I like how Nas tracks the ball, he has a knack for it. His vision as a RB helps him on defense. Nas has excellent instincts, displaying his high IQ to put his team in the best positions to be successful. Being this young and possessing these playmaker abilities is impressive. Nas will only get better as time goes on and his reps increase. Be on the lookout for Nas, I like his stock will continue to rise. I definitely need to see more of Nas in action moving forward.

Nas is a solid player, and his body of work speaks for itself. However, everyone can always improve and elevate their skills. These tweaks I’m about to name will put Nas is good company. Nas has the tendency to run with the ball loose, solid defenders will have a field day ripping at his arms. It’s vital that Nas maintains his five points of contact at all times. This eliminates any chance of committing turnovers. Nas also runs with a high shoulder pad level. Bigger defenders would have a better chance at making a tackle. He’d benefit greatly from lowering his center of gravity, he’ll be able to generate more power and use his leverage to his advantage. The last thing I’d like Nas to work on is creating his pocket for hand-offs. Nas has a tendency to grab the ball underhand which can lead to fumbles. Nas should create a comfortable pocket with the opposite arm facing up creating a more secure pocket for the Qb to work with. In terms of the pocket, think about taking both arms and folding them over one another. It’s as simple as that. A RB’s number one responsibility is ball security, then the rest follows after. All in all, Nas is unique. I like what he brings to the table and once he maximizes his skillset, he’ll be a force to be reckoned with for years on end.

The RNR Committee Rates this athlete 3 out of 5 Stars. His evaluation has earned the following badges as well.