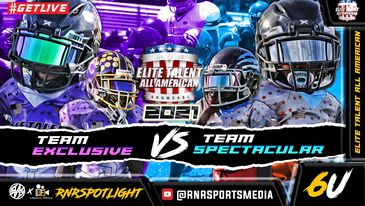 Elite Talent All American 6u game was studded with some of the most talented kids from near and far! The Spotlight was shared by the Florida Elite Heisman Winner, ATH Brody Blake of the Orlando Outlaws and RB Christian Williams of the West Orlando Jags. Christian struck first off of a fumbled snap, which he picked up, broke a tackle, stiff armed another defender and was off to the races. Brody Displayed his vision on his first of 2 scores, which he took a QB sneak up the gut and left a defender collecting his ankles. For team spectacular the most impressive athlete in my opinion was ATH Mr. Brayden Joiner of the Orlando Outlaws! He made several plays on offense to put points on the board for his team, including the first score of the game, but the way he laid the lumber was the most impressive attribute to his game!