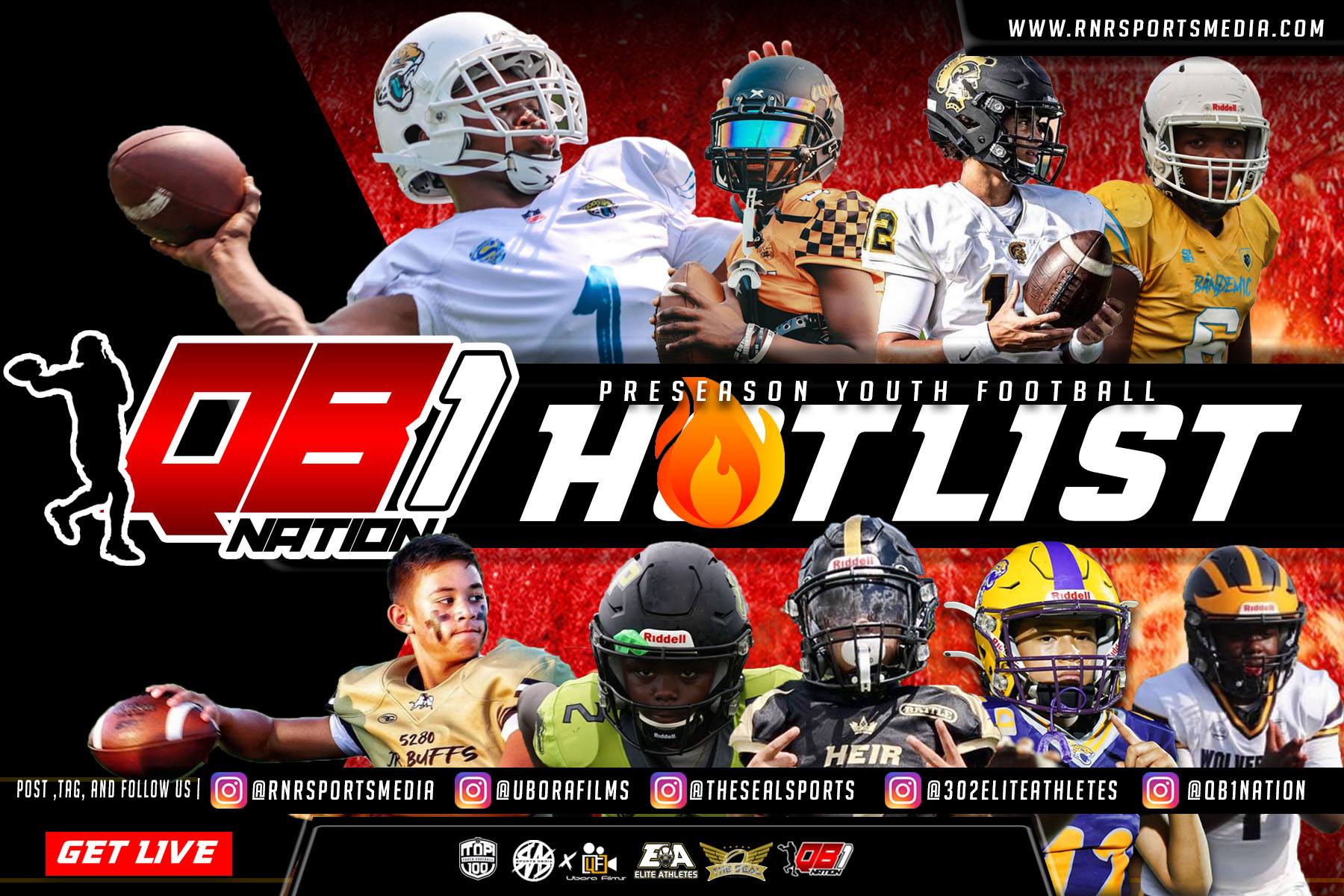 Corey Sadler athleticism & mobility is a dynamic element of what he can create on designed reads or while rolling out to avoid opponents. This kid is an absolute magician with the ball in his hands he proved that against defending National champions City Life Raptors (MD) 13u. The Chosen 1 single handedly beat the defending YNC National Champs by himself ripping off a sensational 69-yard td run & tossing 3 touchdown passes capping off an MVP Performance with a dominating 33-12 victory for his Motor City Jags.

Sadler showed that his improvisational skills are spectacular, as seemingly lost plays routinely turn into significant gains or scores with him at the helm. His pocket presence may be the best in this class, specifically when he reacts to pressure by stepping forward or laterally with shoulders square and eyes downfield. Sadler is a consummate competitor and the kind of quarterback who can rally his troops during times of duress.

Some folks have already deemed him the #1 prospect in his class especially when he is showing off his next level arm strength. A born leader & motivator of his peers he flashes power in his throwing arm leading receivers toward the end zone on deep routes catching them right in stride with the right amount of air on his passes. 2021 was C.J Sadler’s coming out party to the Nation and at this point he has made the biggest statement this year.

Georgia has been a QB factory as of late for power 5 schools looking for franchise Quarterbacks to build their program around. Next in line is Julian “JuJu” Lewis a proven winner since he decided to lace his cleats up. Lewis amazes on game tape, grading out among the most physically gifted Youth quarterbacks we’ve scouted this year. While Lewis may have dominated Middle School Football that’s only part of the picture, but there’s so much about his approach that translates extremely well to High School competition.

Under the tutelage of the QB guru Ron Veal, Lewis is ahead of the curve he looks off defenders and stands tall in the pocket, refusing to sacrifice technique as defenders bear down on him while proving to be a dangerous rollout passer by evading pressure. Lewis exudes confidence in the pocket and delivers strikes anywhere on the field, earning an elite grade for his combination of power and precision. One thing is for certain this kid has all the tools of an Elite QB prospect with so much more room to grow which is the scariest part when evaluating this Phenom.

Few quarterbacks did more to raise their stock in preseason than Tristan Sabb, who looked like a much-improved passer from his 12u season. The DC prospect flexed his muscles game after game to start the season, firing lasers that some receivers had trouble grabbing because the ball came in so hot. Paired with Legendary O.C Coach Lody ,Tristan is having a breakout year putting it all together on the ground and threw the air.

Launching a straight-line dart 30 yards downfield with elite precision that drew strong reaction from fans and media on the sidelines. Sabb has been money with his deep-ball touch bombing with precision on the seam & 9 routes, the arc on the throws were simply a thing of beauty. Armed with the power to deliver the ball down the field in a vertical passing attack. When presented wit the opportunity Sabb took over games spreading the wealth in victories vs Kansas City Outlaws (KS) & Stonecrest Camo (GA). He has his team in prime position to add a 4th straight National Championship to the trophy case. Can’t say our team isn’t surprised by Tristian’s elite performances after all he displayed an elite skill-set at our RNR Top 100 combine taking home QB1 MVP honors.

Cooler than the other side of the pillow Leon Strawder performs better under pressure never fazed by what’s thrown at him, he just keeps his eyes down field and step up in the pocket and deliver strike after strike. Leon is so smooth & patient with the RPO game with a sick sense on when to pull it or drop back either way the results are the same a big play. He never sacrifices accuracy, regardless of the passing distance, and can flash or harness his velocity depending on the play. Strawder moves extremely well in the pocket and is diligent in implementing lower-body mechanics on every toss.

There’s also a sense of urgency in everything he does. That’s an impressive trait for teenage passers, who tend to grow lackadaisical at times. Strawder knew the spotlight was on him at Southern Hospitality and shined under the pressure. He’s willing to take risks and has the talent to thread throws through traffic toward his intended target. Lambo is the right name for this fast-paced lethal balanced attack lead by Field General Leon Strawder, who has stood tall in the biggest of the moments. This kid has arrived Welcome to the National Stage X-Factor.

Already blessed to be the Field General operating a wide-open pass attack that rivals those 14u offenses, Braylon Cave is on record pace to put up some pretty godly numbers. Cave consistently attacks the secondary and never went through a lull during two of the Prides Nationally ranked matchups in fact he stayed on fire.

He has a deadly connection that clicks with X-Factor Magic Kennedy during the Progress Village & Heir game. The duo connected for multiple touchdown passes and quieted doubters knocking off two top 10 teams. Cave is a confident and polished passer who moves well in the pocket. His running ability provides a compelling storyline for the Northside Pride (FL) 10U National Championship run & future offensive outlook, has this team being hard to contain with its plethora of weapons. With strong showings at the RNR Top 100 combine Cave has been waiting for his moment to show that he is among the best on the gridiron.

Ooozing with elite athleticism & a next level frame Payton Cook has exploded on the scene demanding to be mentioned with the top prospects in the country. Cook taste of the spotlight was leading his Akron Armor (OH) 13u team to a dominating victory over National Powerhouse Ginn Elite. Cook is a nightmare in space possessing that top end speed that if he gets a step, you can kiss the baby he is gone. Few 2026 passers can put more power on throws than Cook, who balances his aerial attack with excellent rushing ability. Cook’s accuracy ultimately sets him apart from this pack when he’s given time to operate in the pocket. Based on what we’ve seen scouting live streams & game film, Cooks enters 2021 season as the prospect with the most potential on this list. You can’t teach size and this kid has that coupled with the versatility to be elite at multiple positions. Akron, Ohio has them a budding star on the rise once again.

Hunter Adams an all-around gifted athlete whose skills are routinely slept on due to the “pocket passer” label, throws the prettiest ball in his age group. His combination of accuracy and power is a direct result of firm mechanics and an authoritative approach in the pocket.

2020 Texas Heisman Trophy Winner Hunter Adams set the Heir Academy (WA) 10u secondary a blaze attacking areas of the field with high arcing tight spirals, when all was said and done this kid threw 5 touchdown passes putting the nation on notice the Wolverines aren’t going anywhere. Very few quarterbacks in the country are on a hot streak like Hunter Adams he is putting up iconic numbers serving up a legitimate wire-to-wire performance. Adams moves well in the pocket and has been spreading the wealth evenly among his talented receiving core leading a high-powered offense averaging an astounding 50 points per game. Just know when you are saying the hottest of the hot start things off speaking on this record breaking 10-year-old Hunter Adams leading the defending YNC National Champions S.E.D Wolverines.

Trent Seaborn is the most gifted passer in the country and faced a bit of adversity with his team having a rough go out the gate taking L to BBB 34-8. Without the services of his #1 target WR Jupree Jennings, Seaborn has still manage to elevate his game to new heights picking apart defenses. Seaborn is a pure pocket passer who lights teams up with a quick release. He is decisive and puts the ball on the money, particularly in the short-to-intermediate passing attack. Seaborn has mastered the art of pretty high arcing deep-balls with pinpoint accuracy, his mechanical framework has him catching guys in stride for scores, including a well-developed drop back. Trent is on pace to eclipse last year’s numbers as he has found his groove lighting defenses up.

When you examine the premier passers in this 10u age group, Cordea Norling may have the best opportunity to start to be something special by the time he is finished playing Youth Ball. He is extremely accurate in the intermediate passing game and possesses a strong enough arm to develop more precision on his deep ball. Norling will also make opponents pay with his legs, evading tacklers in the pocket and taking off on designed runs. The Heir Academy Field general is easily one of the top QB’s in his class with an impressive resume to match. When the lights shine the brightest Cordea Norling seems to raise his level of play to championship caliber to get his soldiers over the hump. With a Natty under his belt Norling simply knows how to win.

Tough and scrappy Kade Wigginton gets it done behind his cannon of an arm, we saw the results on the biggest stage. Anytime his team got in a shootout and needed a play Kade would stare down the blitz and deliver strikes for scores. A tad bit of a compact frame and underrated elusiveness make Wigginton a formidable force outside of the pocket. However, he is at his best when given time behind center to survey the field and fire with his quick release. Wigginton isn’t afraid to take chances in traffic, which may get him in trouble at times but pays off big once he finds his rhythm, but he provides some scintillating moments when he is cooking defenses. Behind Wigginton gutsy performances Ross Elite is sitting in prime position to make a Natty run.

A.J Chung legs play a crucial role in his effectiveness maneuvering within the pocket, even when he doesn’t tuck the ball and take off. He avoids pressure in the pocket, standing tall and maintaining active footwork as he surveys the field. Despite taking some loses in Preseason heading into the regular season with more national experience than most of his contemporaries, Chung seemed more poised than most passers he dueled against.

Chung is a very good, poised decision-maker, that possesses the arm strength needed to fit balls in tight spots and extends plays with mobility. When Chung is on, he is on he can sling it with the best of them. If you’re looking for big things in a small package look no further A.J Chung is your guy a flat-out gamer that loves to compete.